The earliest white settlers of what is today Scott County, Tenn., moved into the region in the latter part of the 18th Century, circa 1778. They settled along the New River, in what was at the time part of North Carolina. They established farms and worked the land around the river and its tributaries.

A New State is Formed

By 1790, the area that would eventually become Scott County had been ceded by North Carolina to the federal government and was part of the Southwest Territory. In 1796, Tennessee was granted statehood and admitted into the Union. The areas of present-day Scott County were surveyed into Campbell, Fentress and Morgan counties.

In those days, Tennessee’s border with Kentucky was a matter of dispute. At the heart of the dispute was an incorrect survey. Dr. Frank Thomas noted in the Winter 1991 edition of the FNB Chronicle that, “had the line been properly surveyed, the state line would run through Oneida near the traffic light in Oak Grove.”

A compromised was eventually reached between the new state governments of Tennessee and Kentucky, and the present-day border was established just north of Winfield. However, it wasn’t until a survey in 1859 — 10 years after Scott County was established — that the exact boundary became certain.

Carving Out A Way of Life on the Frontier

Over the seven decades following the War of Independence, settlers continued to move into the region between the Big South Fork of the Cumberland River in Fentress County and the Cumberland Mountains in Campbell County. Communities were established and a way of life was carved out atop the Cumberland Plateau. 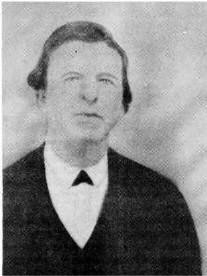 Wild game was, as now, plentiful in those early days. One of Scott County’s first elected trustees, Jehu Phillips, wrote in a 1904 edition of the Cumberland Chronicle, “There used to be just plenty of fish in the streams in this county. Father had a trap in New River just below the mouth of Bull Creek and we got all the fish we wanted. There were so many fish in those days that when people went to their fish traps they would throw small and medium sized fish back into the water and only keep the largest fish. People never thought of selling fish then, you could just go up to a neighbor who had a trap and he would give you all the fish you wanted. We used to dry fish in those days — a thing you never see done now. When I was a boy there was in New River a fish which you never see here now. It was a red mouthed fish called a buffalo. The buffalo got as large as 22 pounds and the average weight was about 10 or 12 pounds. These fish did not have so many bones in them as the suckers and red horse.”

Elk, panthers and black bear roamed the area in those days. Elk and bear populations have since been reestablished by the Tennessee Wildlife Resouces Agency — bear in the Big South Fork National River & Recreation Area in 1995 and elk in the North Cumberland Wildlife Management Area in 2000.

The Need for A New County

By the 1840s, a problem had emerged, as related in historian H. Clay Smith’s book, Dusty Bits of the Forgotten Past:

“By 1845 to 1849 there had developed a serious situation confronting the population of the back part of Campbell County and of the northern one of Morgan County, along with that of the eastern part of Fentress. This last was bordered by the Big South Fork of the Cumberland River, which had become a dangerous and treacherous river to cross when people had to attend court in Jamestown. There was a long period of travel from the back sections of Campbell County, with a mountain to cross and only the Jacksboro-to-Huntsville road and the Buffalo-Paint Rock trail, or road, so-called.”

In December, 1849, Scott County was established by an act of the state legislature. The new county was named for Gen. Winfield Scott, a hero of the War of 1812. 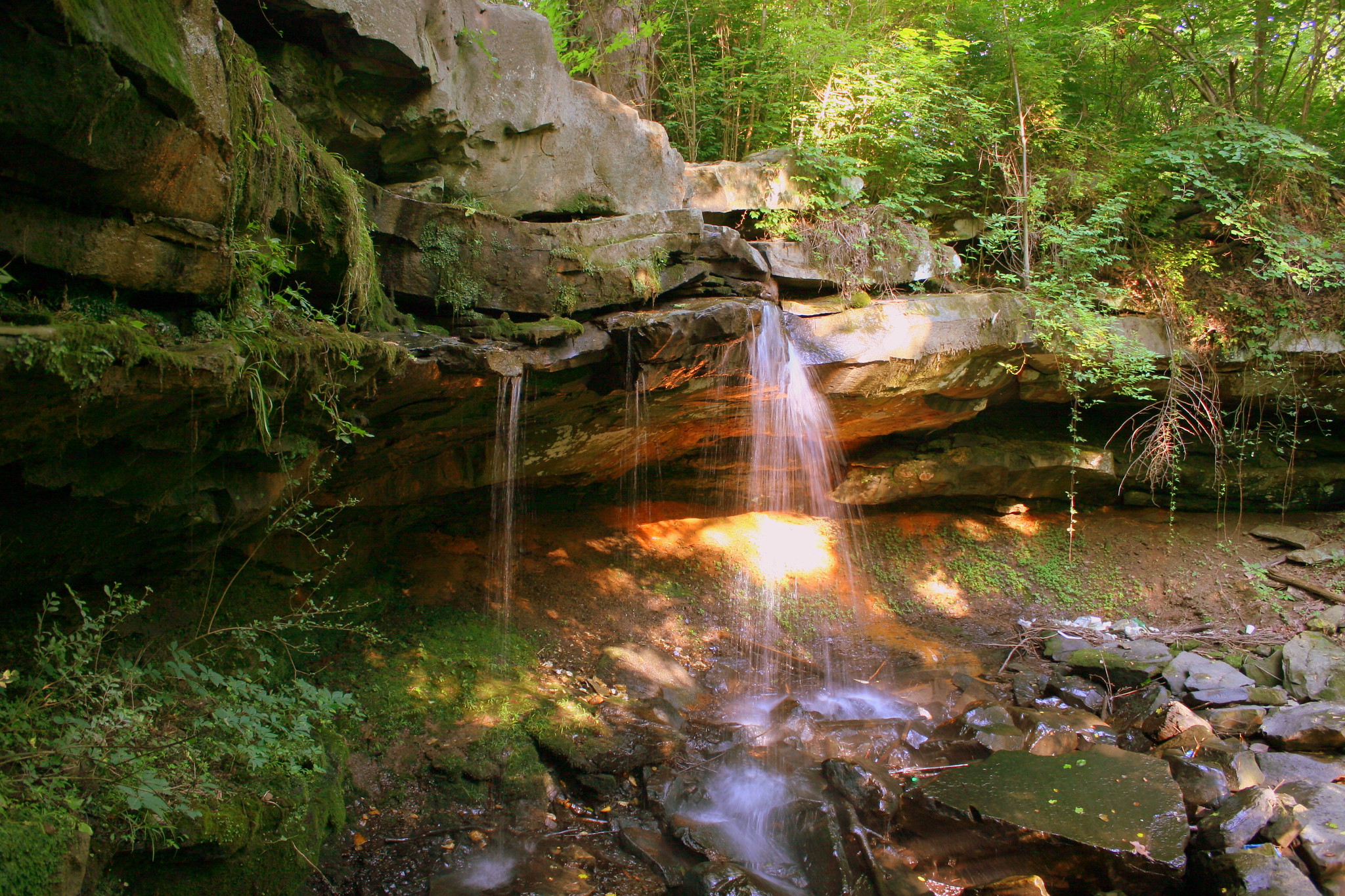 Three areas were nominated for the county seat — farms in Buffalo, Paint Rock and what is now Huntsville. The latter was chosen, in part because of a natural spring that flowed near where the county’s jail would eventually be built. The Old Town Springs still flows today.

On June 8, 1861, Scott Countians voted overwhelmingly against secession. Later, County Court would vote to approve a resolution announcing Scott County’s decision to secede from Tennessee and form the Independent State of Scott.

Today, a marker near the entrance to the Huntsville Mall reads, “United States Senator Andrew Johnson delivered a speech at the Courthouse at Huntsville on June 4, 1861, against separation. At the election four days later Scott County voted against separation by the largest percentage margin of any county in Tennessee. Later that year in defiance of the state’s action of secession, the county court by resolution seceded from the state and formed the Free and Independent State of Scott.”

While no major battles were fought on Scott County’s soil during the Civil War, guerrilla warfare was common here. County historian Paul Roy noted in his book, Scott County in the Civil War:

“Scott County was isolated from both the North and the South during the Civil War — a mountainous region seemingly of no strategic importance for either side. But the war touched every man, woman and child in this county and the land which neither side needed or wanted provided an ideal escape for loyal East Tennesseans trying to get to Kentucky to join in the fight to preserve the Union. And, two years later, it proved to be the route taken by General Ambrose Burnside’s army which marched from the friendly confines of Kentucky through the ‘wilderness’ of Scott County en route to seize Knoxville from the grasp of the Confederacy.

“There were numerous confrontations and fire fights between Union and Confederate soldiers, Northern and Southern sympathizers, private citizens and lawless bands of men with sympathies to one side or the other throughout the war. Men and boys hid out in the woods to avoid being conscripted into the service, while women and children had to assume their duties on the farm. Anything of value, real or emotional, had to be hidden away in the ground, a hollow tree, or under a rock ledge for fear that it would be taken. Families were often hard-pressed to keep food from being taken as soldiers marching through Scott County were always foraging for food, both for themselves and for their horses. On those rare occasions when great numbers of soldiers came through the county, farmers along the major routes would lose everything — their crops in the field for food for the soldiers, fodder for their horses and mules, and rail fences for their firewood.”

Following Reconstruction in the 1880s, the Cincinnati-Southern Railroad (now the Norfolk-Southern Railroad) was constructed through Scott County. The railroad helped to open Scott County to development of timber and mining industries. Oneida was established as a stopping point on the railroad, and would eventually grow to become the economic hub of Scott County. In 1913, the town was incorporated.

The railroad helped spur the coal and coke industry in Glenmary, a small community in southern Scott County. The Glenmary Coal & Coke Co. began production in 1885 and continued until 1904. A lumber mill — the Tennessee Coal & Lumber Co. — was also established. In the process, Glenmary became the largest community in Scott County, though its success was short-lived.

The railroad also helped to spur another industry in southern Scott County — brick making. Workers discovered a deposit of clay used to mold bricks, and a brick-making plant was established by the Tennessee Paving Brick Company, which sold its operations in Robbins to the Southern Clay Manufacturing Company in 1902. At its peak in the early 1930s, the Robbins Brickyard was producing around 80,000 bricks each day. Big South Fork NRRA archeologist Tom Des Jean wrote in the Summer 1996 edition of the FNB Chronicle that hurricanes in Florida spelled the end of a decade-long construction boom. Production at the Brickyard ended in 1937. 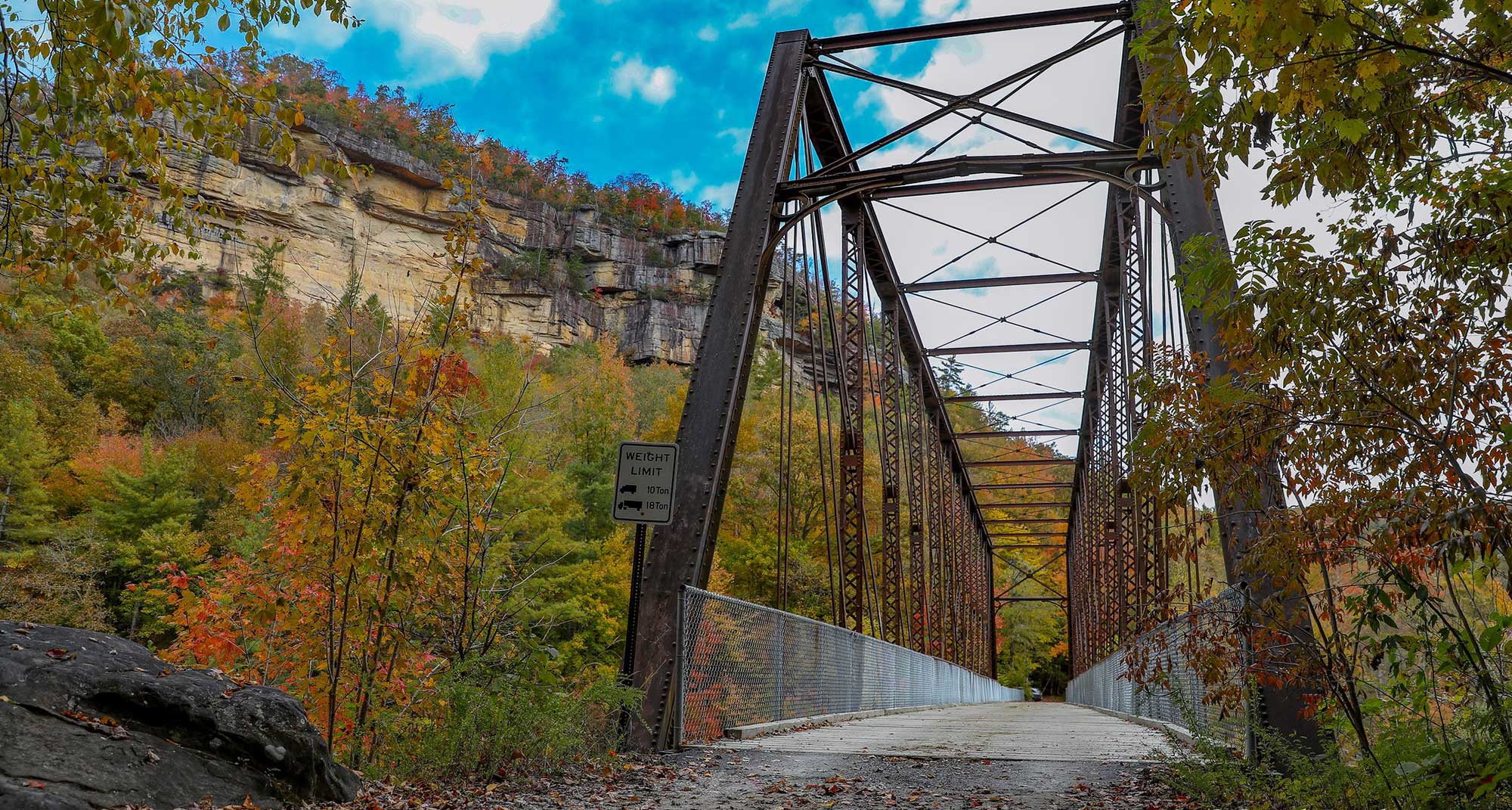 The Oneida & Western Railroad Bridge — or simply the O&W Bridge — was originally built in the late 1800s, and was moved to Big South Fork in 1817 as the railroad was being built (Sarah Dunlap)

A Second Railroad is Established

In 1913, construction was started on another railroad — the Oneida & Western, a 30-mile line connecting Oneida to Jamestown in Fentress County. The railroad line opened the rugged gorge through which the Big South Fork of the Cumberland River flowed to natural resources extraction. Much of the lands in the region, collectively known as “The Big Survey,” were owned by Stearns Coal & Lumber Co. The O&W had originally been proposed as a railroad from Elgin, in southern Scott County, to Jamestown, and later as a railroad from Oneida to Albany, Ky., before the Oneida to Jamestown line actually became reality.

Scott County prospered during the O&W years. But the Great Depression took its toll on the railroad. As natural resources in the region played out, the O&W was no longer needed. A court eventually granted a request for the railroad to be abandoned, and the last train traveled the rails in 1954.

In the 1920s, another avenue of transportation was opened in Scott County with the construction of U.S. Hwy. 27, which runs from Miami, Fla., to Fort Wayne, Ind. By 1925, construction was nearing completion on the Tennessee Railroad, a 45-mile short line that ran from Oneida to the Anderson County coal community of Devonia. At its peak between 1970 and 1980, the Tennessee pulled 125 cars each day out of the New River Basin.

As coal production dwindled, the Tennessee was eventually sold to Norfolk-Southern, which closed the railroad line by the beginning of the 21st Century. By 2006, coal production was again on the increase in the New River Basin and the line was reopened by National Coal Railroad Co., which purchased the line from Norfolk-Southern. In 2010, National Coal sold the rail line to Jim Justice, a West Virginia coal entrepreneur.

Incorporation of the County Seat and a Birth of Recreation

By the 1970s, many of the large timber land tracts in the region were changing hands, and a good chunk of them were being purchased by federal and state government, perhaps recognizing the unique landscape of the area.

The initial land purchases for the 115,000-acre recreation area had begun by 1980, and the park had been turned over to the National Park Service for management by 1990.

In 1994, 50,000 acres of the Koppers Coal Reserve falling partially into Scott County were purchased by the State of Tennessee and the Royal Blue Wildlife Management Area was established. In 2003, the state purchased an adjoining tract of land, totaling more than 70,000 acres, and established the Sundquist Wildlife Management Area, named for former Tennessee Gov. Don Sundquist. In 2007, the 40,000 acres of Huntsville-based Brimstone Company were sold in a deal between the State of Tennessee and Lyme Timber Co. Approximately half of the property was used to establish a new wildlife management area.